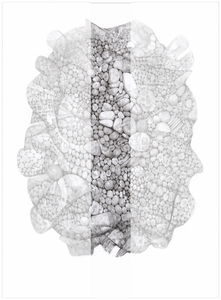 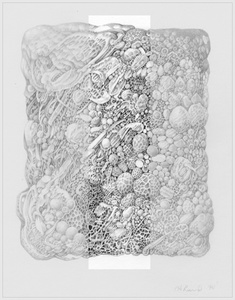 
This series of drawings represents a unique volume of work that both precedes and supports the new and expanding field of “Neuroaesthetics". The images explore the idea that differences in the right and left sides of a picture may also represent differences between the two hemispheres of the brain, with regard to aesthetic problem solving.
My images relate to the spontaneity of “action painting”, the surrealists' explorations of the subconscious, discoveries in neuroscience about the structure of our visual system and the processing of visual information, and real life experiences surrounding an awareness of the sensations of “peripheral visual reflex responses”.
My process is based on the understanding that visual information from each half of the visual field is initially processed by a single and opposite hemisphere of the brain. As Stephen Kosslyn describes it in his book, "IMAGE and BRAIN" (page 40), "If a visual stimulus appears briefly to the left or right side...., its image will strike only a single hemiretina (in both eyes) and the stimulus will be initially processed in one or the other hemisphere."
Each drawing begins as a random mass of scribbles. Shifting my attention to peripheral visual sensations (similar to a peripheral vision reflex response) I try to locate shapes or junctions of shapes on either side of the drawing. I then define the shapes using inferred contours. Consequently the images appear as they are as a result of the process.
The middle 1/3 section of the drawing appears to be an area of integration. The left 1/3 and the right 1/3, I feel may reflect how the right and left hemispheres of the brain may be processing the information about the initial mass of scribbles, each in a different way.
My medium is a combination of litho-crayons, graphite, and a variety of black pigment pencils on paper.
Loading...